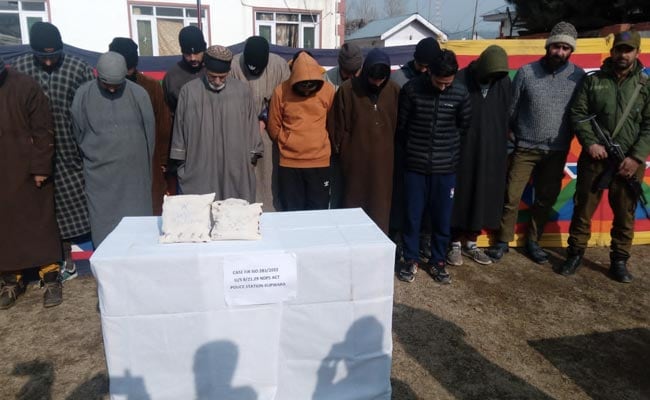 Police said so far they have recovered two kgs of heroin from the accused.

In a major crackdown on drug trafficking originating from Pakistan, police have arrested 17 people, including five policemen, in the Kupwara district of Jammu and Kashmir.

Police said the large module was involved in drug smuggling from near the Line of Control and then supplying it in different parts of Kashmir.

According to police, the drugs were coming from Pakistan through the Keran sector in Kupwara district.

“We have busted a major narcotics’ module. 17 people have been arrested — five policemen, shopkeepers, a political activist, and a contractor,” said Yougal Kumar Manhas, Senior Superintendent of Police (SSP), Kupwara, adding that the drugs were originating from Pakistan.

“Shakir Ali Khan, a resident of Keran who is based in Pakistan occupied Kashmir, was supplying drugs to his son Tamheed Ahmad living in Keran,” the SSP added.

According to the police, they zeroed in on some drug paddlers in Kupwara town and its adjoining areas. During the course of investigation, they found a large network involved in narcotic smuggling.

Police said so far they have recovered two kgs of heroin from the accused. “The module had received five kgs of heroine,” the SSP said.

Police said this year they have registered 85 cases against 161 people in the frontier district of Kashmir.

Drug trafficking has become a major challenge for the government. Even security forces officials posted near the Line of Control have been accused of helping cross-border drug trafficking.

The NIA had even recovered Rs 91 lakh cash from BSF sub-inspector Romesh Kumar. The cash was said to be part of the proceeds of drug trafficking.

New Covid Alert: Too Soon For Curbs Or Should We Worry?