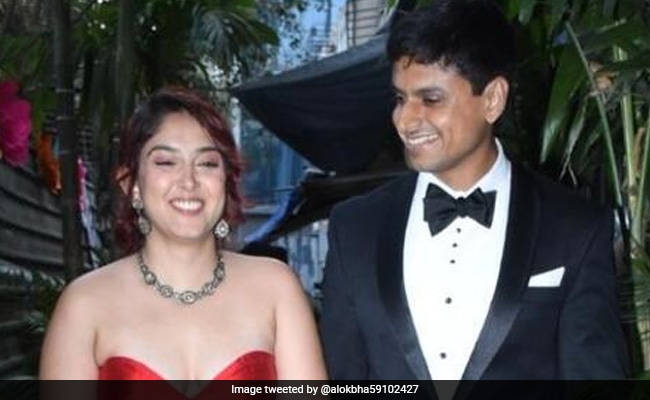 Ira Khan got engegd to her boyfriend Nupur Shikhare in Mumbai today. The pictures from Ira’s engagement ceremony is going viral on social media. In the pictures, Ira Khan can be seen wearing a gorgeous red gown, while her boyfriend Nupur Shikhare can be seen in a black suit. The engagement ceremony was attended by Ira’s father Aamir Khan, mother Reena Dutta, Kiran Rao, Aamir Khan’s nephew Imran Khan and grandmother Zeenat Hussain. Aamir Khan, in the viral pictures, can be seen sporting an ethnic look. The actor is wearing kurta with matching dhoti.

Check out the pictures of Ira Khan, Nupur Shikhare and Aamir Khan shared by a Twitter user:

Nupur Shikhare, a celebrity fitness trainer, proposed to Ira Khan a few months ago at one of his cycling event in Italy. The couple, who have been dating for a while now, shared the video from their proposal on their respective Instagram handles.

Check out the video here:

Ira Khan is the daughter of Aamir Khan with his first wife Reena Dutta. Ira and Nupur often shared adorable couple posts on their Instagram handle.

Check out a few of their pictures here:

Aamir Khan recently announced a break from film for a year and half to spend time with his family. A few days later, Ira hosted her engagement ceremony.

Boy Tries To Play Basketball In Freezing Weather, This Happened Next “You Are Trying To Steal”: Ravi Shastri’s Strong Take On Deepti Sharma-Charlie Dean Run Out Controversy