Argentina added a third FIFA World Cup title to their trophy cabinet when they beat France in the final of the 2022 edition on Sunday. Argentina beat France on penalties in a final for the ages, triumphing 4-2 in the shoot-out after Kylian Mbappe‘s hat-trick ensured the game ended level at 3-3 following extra time. Messi opened the scoring with a penalty midway through the first half before Angel Di Maria doubled Argentina’s lead on the counter-attack in the 36th minute. But the astonishing Mbappe breathed life into the holders as he pulled one back from the spot with 10 minutes left before equalising in stunning fashion just 60 seconds later to force extra time.

Messi then seemed to have decided the contest in Argentina’s favour once and for all when he scored again in the 109th minute, only for Mbappe to net another spot-kick, making it 3-3 and forcing a shoot-out.

The third World Cup final penalty shoot-out started with Messi and Mbappe both scoring, but Kingsley Coman‘s next kick for France was saved and Aurelien Tchouameni then crucially missed the target.

Now, Di Maria’s wife Jorgelina Cardoso has revealed WhatsApp messages from her husband, a day before the final, in which he correctly predicted that Argentina would defeat France and he would score in the final. She published the screenshot of the chat in her Instagram story.

“I will be world champion, my love. It is written. And I will score a goal. Because it is written like at the Maracana and at Wembley,” Di Maria wrote on Saturday.

Cardoso then wrote: “This message melts my body, I don’t know what the hell to tell you.”

Di Maria replied: “You don’t have to say anything. Go and enjoy everything tomorrow because we will be world champions. Because the 26 who are here and everyone’s families deserve it.” 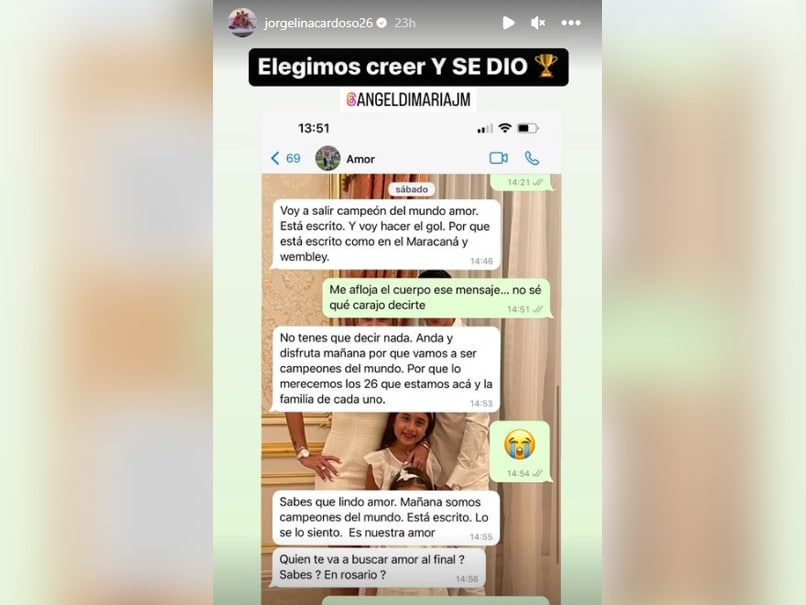