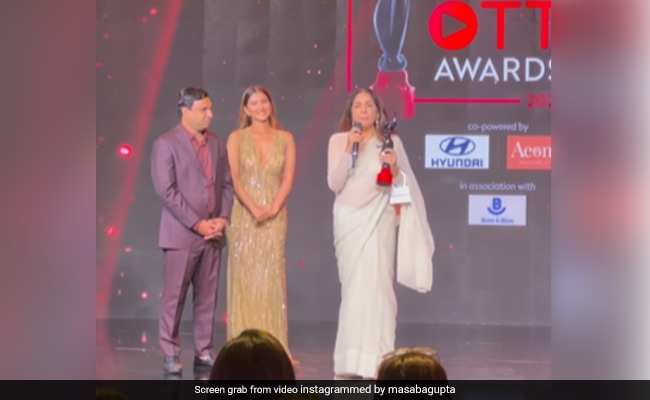 Neena Gupta is an actress who needs no introduction. The veteran performer has an impressive body of work that has left a mark on cinema lovers across the country. At the recently held Filmfare OTT Awards, Neena Gupta was recognised for her work in the web series Panchayat. She was also nominated in the category – Best Supporting Actor, Series (Female): Comedy – for her character inMasaba Masaba,which featured her daughter Masaba Gupta in the titular role. Now, an endearing video of Neena Gupta accepting her award has been shared on social media by Masaba, who was also nominated in the best actress category for Masaba Masaba.

In the clip, Neena Gupta mistakenly says that she is nominated against her daughter for Masaba Masaba and goes on to assume that she has won the award for the Netflix series. However, she is soon corrected and told by the audience that she won the award for her role in Panchayat. This leaves her confused and she says that she assumed she won for Masaba Masaba and then thanks the team Panchayat for being corrected. “Oh, that means Masaba has a chance,” Neena Gupta adds as the audience laughs and the host of the show teases the veteran actress on her unique and flattering predicament.

In the caption, Masaba Gupta said, “Please enjoy this video of my mother living her best life on and off the stage because all the awards are hers only ya Congratulations team panchayat for the killer win last night! One of my favourite shows. Neena Gupta in a nearly 20-year-old Wendell Rodricks sari with a pearl-encrusted blouse and Jacquemus bag from my collection that fits nothing but one’s ego which should be as tiny as this bag. Hai na #mymummygreatest.”

Neena Gupta knows how to keep her fans entertained. Last month, the actress shared a video of her practicing Bachata. Replying to the post, Tahira Kashyap commented: “You are amazing Neena ji.”

Here’s another video of Neena Gupta working out that she shared with the caption: “Just started but showing off.”

Neena Gupta was last seen in Uunchai with Amitabh Bachchan, Anupam Kher, Boman Irani and Parineeti Chopra. She will be seen next in Vadh.

Deepika-Ranveer Watched Argentina Win The World Cup Like This