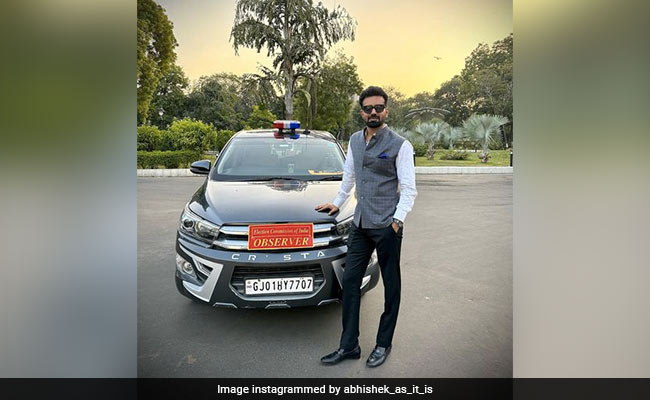 Abhishek Singh had been appointed General Observer for two assembly constituencies in Ahmedabad.

An officer assigned to Gujarat election duties has paid heavily for his posts on Instagram. Abhishek Singh, an IAS (Indian Administrative Service) officer, was removed by the Election Commission for apparently flaunting his posting on Instagram, sources said today.

Abhishek Singh had “used Instagram for sharing his posting/joining as General Observer and had used his official position as a publicity stunt”, the Election Commission’s order reportedly says.

Ahead of next month’s Gujarat election, Abhishek Singh, an Uttar Pradesh cadre officer, had been appointed General Observer for two assembly constituencies in Ahmedabad – Bapunagar and Asarwa.

The officer, who calls himself Abhishek S IAS on social media, shared two photos on Instagram. In one, he stands next to an official car with a beacon and “Observer” written on the front. “Joined as Observer for Gujarat elections,” the caption said.

Another post showed him with three more officials and an armed security man, all smiling at the camera.

Mr Singh, who appears to be active on social media and describes himself as a “public servant, actor, social entrepreneur and stubborn optimist”, shared the same photos on Twitter.

According to sources, the Election Commission had “taken a very serious view” of the officer’s Insta post and so, he “has been relieved immediately of his duties as General Observer and has been debarred from any election related duty till further orders.”

The officer was ordered to leave the constituency immediately and report to his parent cadre. All government facilities provided to him in Gujarat were also taken away, including the car featured in his posts.

Gujarat will vote on December 1 and 5 for a new government. The results will be declared on December 8.