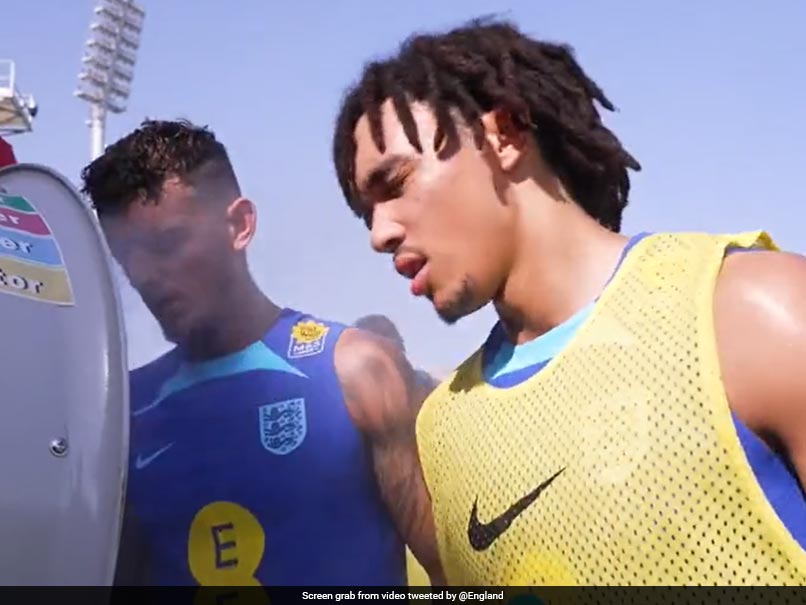 The England players were seen drenched in sweat and going to an air cooler to beat the heat.© Twitter

England are one of the favourites to win the FIFA World Cup, which kicks off on Sunday, with the hosts Qatar taking on Ecuador in the opener. England have been drawn in Group B, alongside Iran, USA and Wales. With England’s opening game against Iran just two days away, the Three Lions squad trained at the Al Wakrah sports complex. The England players, however, were finding it to cope up with the heat. In a video shared on social media, the players were seen drenched in sweat and going to an air cooler to beat the heat.

But the Football Association, who are understood to be seeking clarity on whether the armbands can be worn together, are believed to be ready to support the ‘OneLove’ campaign regardless.

However, France captain Hugo Lloris, who is Kane’s teammate at club level, said that he won’t be wearing the ‘OneLove’ armband, citing that he wanted to “show respect” to host nation Qatar.

“I have been quite clear about this and I don’t want to add anything else,” Lloris said in an interview with AFP.

“When we welcome foreign visitors to France, we often would like them to respect our rules and our culture. I will do the same when I go to Qatar,” he said.