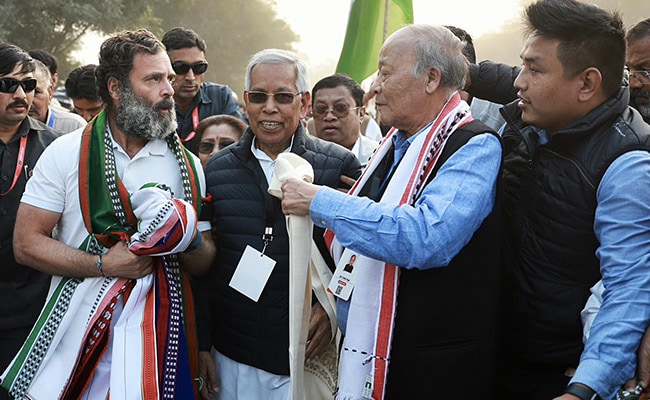 The Uddhav Thackeray-led Shiv Sena faction today slammed the Centre over its letter sent to Congress Rahul Gandhi and Rajasthan chief minister Ashok Gehlot urging them to consider suspending or postponing the Bharat Jodo Yatra if Covid protocols could not be followed.

“Health Minister Mansukh Mandaviya has suggested either follow Covid protocol in the Bharat Jodo Yatra or stop the foot march. Rahul Gandhi has completed 100 days of his Bharat Jodo Yatra and is receiving mass support on a large scale. The government could not stop it by law or by conspiracy so it seems the Union government has released the ‘Covid-19’ virus,” an editorial in Saamana, the political mouthpiece of the Thackeray camp said.

“The fear of rising in Covid cases due to the rush of the ‘Bharat Jodo’ yatra is right. But three years ago when Corona wreaked havoc, you were the one who invited the then US President Trump to Gujarat and gathered lakhs of people in his honour,” the magazine said further.

“Follow the COVID guidelines strictly during Bharat Jodo Yatra which is going on in Rajasthan. Use of masks-sanitiser should be implemented. Only vaccinated people should participate,” the Health Minister said in the letter.

Mandaviya has also requested postponing the foot march if the Congress is unable to follow protocol.

“If following COVID protocol is not possible then the Bharat Jodo Yatra be postponed in the national interest, taking note of the public health emergency,” the letter further stated.

The letter triggered a heavy backlash from the Congress Party with Rajasthan Chief Minister Gehlot claiming that the letter was written because the Modi government got alarmed by the huge turnout in the Bharat Jodo.

“The BJP and the Modi government are so alarmed by the huge turnout in the Bharat Jodo Yatra in Rajasthan that they are writing letters to Rahul Gandhi to follow the Covid-19 protocol in Rajasthan,” Gehlot said on Wednesday while talking to the reporters.

He further accused that the step of writing the letter was not in the interest of the public but “politically motivated”.

“PM Modi did rallies in Tripura two days ago where no COVID protocols were followed. During the second wave of COVID also, PM had mass rallies in West Bengal. If the Union Health Minister’s objective is not political and his concern is justified, then he should have written the first letter to the Prime Minister,” Gehlot said.

Later on Wednesday, Chhattisgarh Chief Minister Bhupesh Baghel attacked the Centre government over the Health Minister’s letter and said that the BJP is looking for reasons to stop the Congress’ Yatra.

“They (BJP) are looking for new ways to stop the Yatra. If COVID spreads in the country, Yatra will be impacted. But if it is not the case now, why are they looking for new excuses?” Baghel said.

He said, “When there was Corona, you (BJP) held elections in West Bengal, Assam and Uttar Pradesh. Now you’re making excuses to stop Yatra.”

“During the Covid-19 pandemic, elections were conducted in Bengal, Assam, and Uttar Pradesh. Then there was no issue. If Covid situation gets worse, the party will take the decision about Yatra. What’s the point of creating hue and cry now, when there is no alarming situation?” said Baghel while speaking to reporters on Wednesday.

Amid the fresh Covid scare, Union Health Minister chaired a high-level meeting on Wednesday to review the prevailing Covid-19 situation in the country and the preparedness of the public health system for surveillance, containment and management of the pandemic.

He urged people to follow Covid-appropriate behaviour and get vaccinated against Covid-19.

Emphasizing that the pandemic is not over yet, he asked officials to be fully geared up to challenge and step up surveillance.

In the last six months, India reported four cases of the BF.7 Omicron sub-variant, which is reportedly driving the current surge of infections in China.

Sources said there are currently 10 different variants of Covid-19 in the country, with the latest being BF.7.