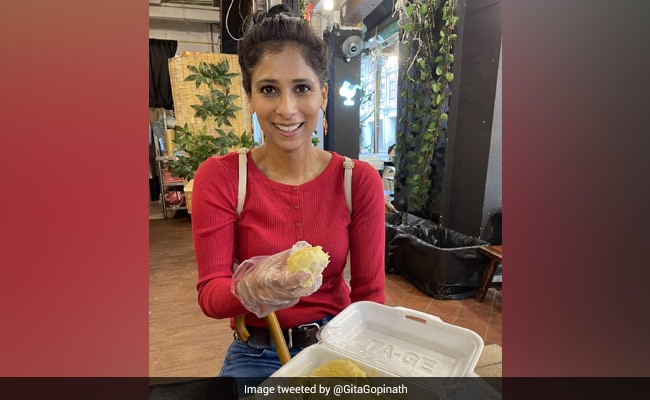 The Deputy Managing Director of the International Monetary Fund (IMF), Gita Gopinath, is currently in Singapore for her first visit to the country. Taking to Twitter on Saturday, the 50-year-old revealed that she visited hawker centres in Singapore and tried the native fruit Durian, which is one of the world’s smelliest fruit.

Ms Gopinath described the taste of the notorious Asian fruit. “…trying out the native fruit Durian (tastes like a mix of jackfruit and avocado),” she wrote in the caption of her social media post, adding, “Very unique. The hawker centers are quite something”.

My first visit to Singapore, trying out the native fruit Durian (tastes like a mix of jackfruit and avocado). Very unique. The hawker centers are quite something. pic.twitter.com/voeANwguLK

Durian is popular in Southeast Asia. It is distinguished by its large size and spiky, hard outer shell. It is very high in nutrients, however, the unique tropical fruit also gets a bad rap due to its strong pungent smell. According to reports, the smell of the fruit is so stench that certain establishments in Singapore have banned the use or entry of the fruit.

“Very dangerous fruit 🙂 from a sign in Thailand last week,” one Twitter user wrote in the comment section of Ms Gopinath’s tweet. “In Bagkok some hotel take fine if you enter with durian,” wrote another.

A third commented, “There is a unsaid rule in Singapore; dont use swimming pools & elevators after eating Durian.” A fourth added, “Very unique fruit. Its smell is close to rotten onion.”

Meanwhile, apart from doing typical touristy things, Gita Gopinath during her trip also met officials and the IMF team in Singapore. She met Senior Minister Tharman Shanmugaratnam, the Managing Director of the Monetary Authority of Singapore Ravi Menon and other IMF team members.

Lots of good meetings in Singapore, with Senior Minister @Tharman_S, MD of Monetary Authority of Singapore @MAS_sg Ravi Menon, &especially getting to meet the IMF team in Singapore. IMF’s Singapore Training Institute is the regional training center for the Asia& Pacific region. pic.twitter.com/6lRLR2Icjw

Gita Gopinath served as chief economist of the IMF between 2019 and 2022. Earlier this year, Ms Gopinath took on the role of the IMF’s first deputy managing director (FDMD).

Before her career in the IMF, Ms Gopinath was the John Zwaanstra Professor of International Studies, and Economics at Harvard University’s economics department (2005-22).