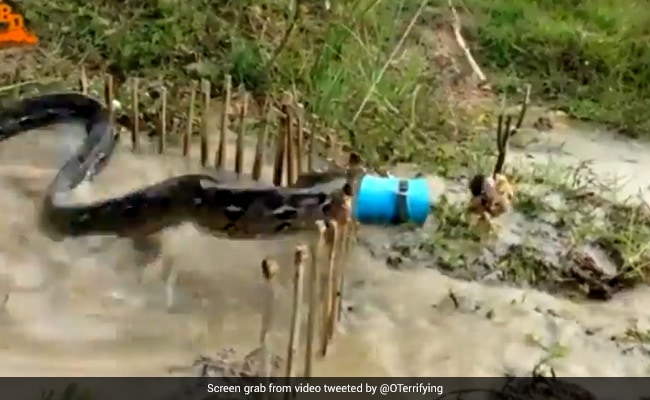 The location where this video was shot is yet to be known.

An old video of a live chicken being used as bait to trap a huge python is going viral on social media yet again. The short video, which previously surfaced online in 2018, was shared on Twitter by a user named Oddly Terrifying on Wednesday, with the caption, “Python trap using live chicken”.

The video shows a giant python sneaking up to the chicken and trying to strike it. However, it gets caught inside a pipe and struggles to get out.

The video opens to show the whole setup of the trap. Seconds later, a python tries to wiggle its way to a chicken. At first, the giant snake tries to go from another opening but after realising there is no other way, it enters through what looks like a plastic blue cylindrical tube.

However, this direct way of reaching the chicken turns too risky for the python as it instantly traps the snake, following which it struggles to get out.

Since being shared, the video has taken the internet by storm. It has garnered whopping five million views on Twitter and over 133,000 likes. In the comment section internet users expressed their views about the trap. While some found the trap “cruel”, others pointed out that the huge python was capable of harming humans so displacing it was a better option.

“Anyone complaining about this being cruel needs to realize this python could have quite easily taken out an entire farm of animals or even a person. Better to get rid of the snake,” wrote one user. “Nothing “terrifying” just cruelty,” said another.

A third commented, “I can’t believe such creatures exist.” “Not sure what to be amazed with, the immense tensile strength of those small stakes to hold off a python that big or a zero frightened, super chilled chicken, woow!” added fourth.

The location where this video was shot is yet to be known. Fire In Delhi’s Electronics Mega Market Still Out Of Control, 24 Hours And Counting