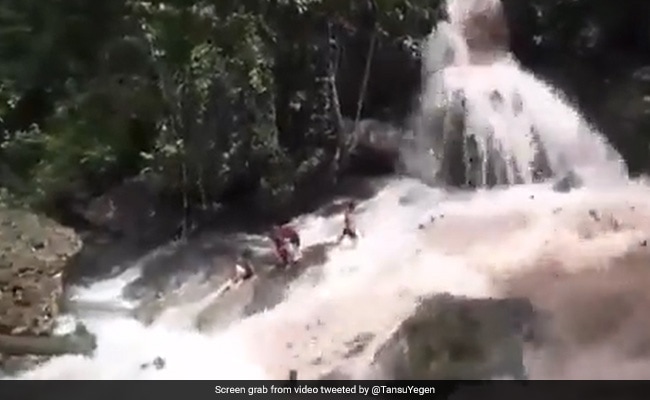 The incident took place at Tinubdan Falls in Catmon Town in Northern Cebu.

An old video from 2021 is going viral again on the internet. The video shows a group of tourists at a Philippines waterfall being washed away by an unexpected flash flood. The sudden gush of water left tourists sitting near the waterfall swept away, the unfortunate incident took place at Tinubdan Falls in Catmon Town in Northern Cebu.

The video was posted by Tansu Yegen on Twitter and so far it has amassed nearly 2 million views on Twitter with 17,200 likes and over 3000 retweets. Along with the video, the caption reads, “Your life is more important than your number of social media likes.”

Your life is more important than your number of social media likes👍 pic.twitter.com/COaaTCV4lK

A user wrote, “The comments! The phuck! This was a footage taken when a flash flood/surge happened in Cebu, Philippines. This was not a drone shot for clout! A lot perished during this time. Respect for the families please.”

“Wow! It looks to me that the young lady in the black tee on the right side that jumped down to grab the little girl in the white tee were both swept down to the lower left of the screen and drowned as it seems the water gotten over their heads. My goodness,” read another comment.

“this is much more frequent than you think. the thing is, when you go to a waterfall, make sure to check how’s the weather forecast for the higher ground area. sometimes it’s nice and sunny where you are, but if it rains uphill, you’re f*cked. it happens a lot here in brazil,” the third user wrote.

“Your caption is kinda insensitive. This happened in the Philippines, this accident is caused by sudden flashflood. The people in the picture is a family, and almost wiped out,” expressed the fourth user.