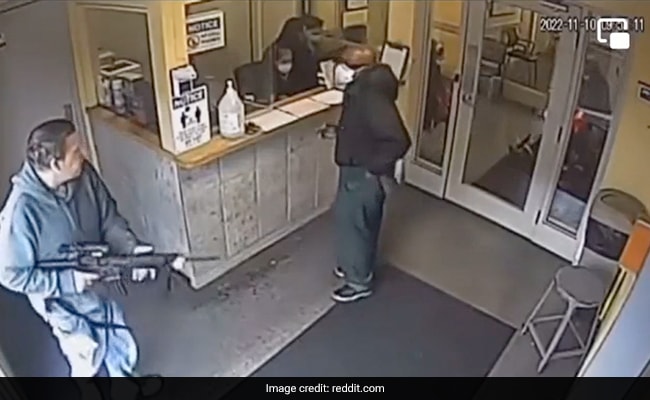 The incident took place earlier this month on November 10.

An unarmed security guard in the United States is being praised online for his brave actions in a confrontation with a man armed with an AR-15 assault rifle. A CCTV footage shared on Reddit showed the man, identified as Jeremy Griffin, entering a substance abuse treatment clinic in Buffalo, New York, and brandishing the weapon before being pinned down to the ground by a security guard.

The incident took place earlier this month on November 10. The short clip showed the unarmed guard standing in the entrance hall of the clinic, opposite a reception desk and in front of a closed glass door. The gunman is then seen approaching the hall through the front entrance and firing one shot into the wall. The unarmed security guard tackled and restrained the man until other officers arrived.

Towards the end of the video, the two are seen having a go at each other before the guard was able to drag Mr Griffin outside. According to CBS News, Mr Griffin’s gun was discharged two additional times during the fight, but no one was struck inside the clinic.

The video, which has been shared on several social media platforms, has taken the internet by storm. On Reddit, the post garnered more than 143,000 upvotes and several comments.

A third commented, “His move was exactly right. A rifle doesn’t work that well in that kind of contact. The guard used it to choke the attacker. Great move.” A fourth added, “That’s the definition of a hero.”

Meanwhile, according to CBS, the cops confirmed that Mr Griffin was taken into custody. They suspect that he was also involved in another shooting that occurred just before the one at the clinic. Police said they do not believe that either attack was planned, and both appeared to be attempted robberies “tied to drug activity”. Mom Surprises Son With Mansion, His Reaction Is Viral On Instagram