Pele’s daughter posted a photo of the Brazilian football legend from his hospital bed in Sao Paulo on Friday with the caption “one more night together.” In the photo, Kely Cristina Nascimento is seen hugging her 82-year-old father, with only one side of his face visible in the image. Pele is suffering from worsening cancer as well as kidney and heart problems. “We’re still here, in the fight and in the faith. One more night together,” Nascimento wrote below the photo shared on Instagram around 11:00 pm local time (Saturday 0200 GMT). 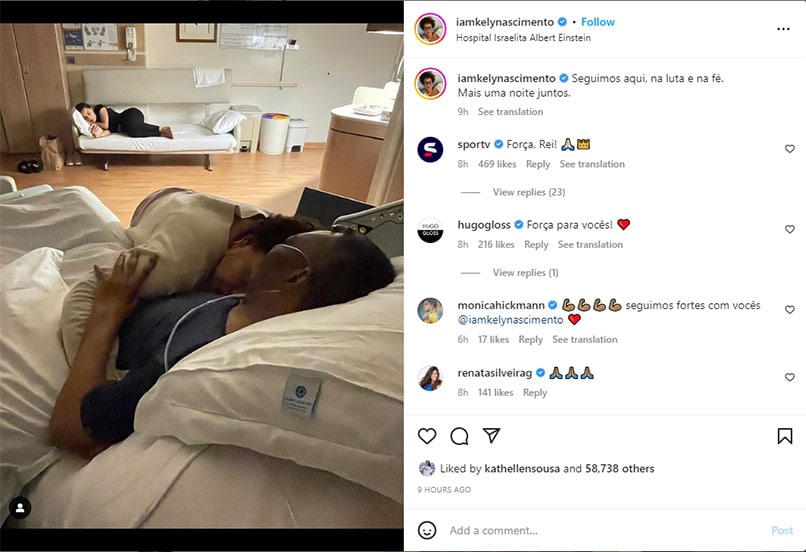 On Wednesday, the Albert Einstein Hospital, where the three-time World Cup winner is staying, announced that his colon cancer was showing “progression” and he needed “more extensive care to treat kidney and heart failure.”

Minutes earlier, Nascimento and Flavia Arantes, another one of Pele’s daughters, had announced on Instagram that their father would spend Christmas at the hospital.

Last Sunday, Nascimento had posted a photo of Arantes massaging their father’s left foot as he watched the World Cup final on TV.

After the match, Pele congratulated Argentine Lionel Messi for his “deserved” victory against France.

During this World Cup, Pele saw Neymar equal his international goal-scoring record for the Selecao (77).

Pele is considered by many to be the greatest footballer of all time and has received several messages of support since his hospitalization, including from the French star Kylian Mbappe, who called on followers to “pray for the King.”

Pele was hospitalized in Sao Paulo on November 29 for what his medical team called a re-evaluation of his chemotherapy treatments, which he has been receiving since having surgery to remove a colon tumor in September 2021.