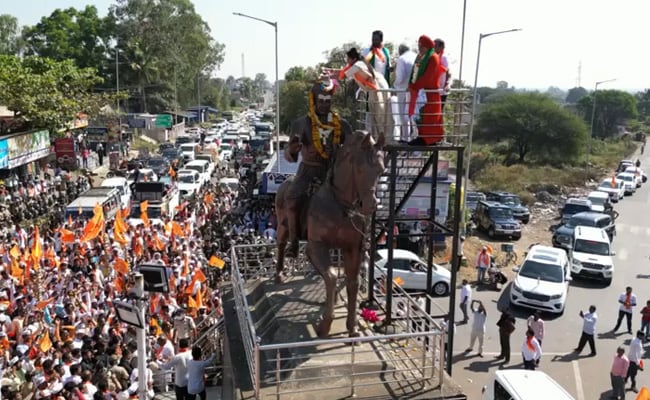 They are also demanding reservations in education and government jobs.

Over a lakh members of the Panchamasali Lingayat community — a sub-sect of the upper caste Lingayat group in Karnataka which constitutes nearly 18 per cent of the state’s population — today staged a massive protest demonstration from the iconic Suvarna Soudha in Belagavi demanding reservations in education, and government jobs.

BJP MLA Basanagouda Patil, who has been vocal against senior party leaders BS Yediyurappa and BS Bommai, is spearheading the protest.

Panchamasali Lingayats, who constitute 60 per cent of the Lingayat population, have claimed that they have not been given much-needed political representation, despite forming a larger chunk of the Lingayat community. They have the power to influence over 100 seats in the Kittur Karnataka region, which was earlier known as the Mumbai-Karnataka region, consisting of nearly 7 districts.

The Panchamsalis are the largest formation of various sub sects of the Lingayat Community. They are mostly farmers and people associated with farming in various ways, which is why they carry a plough as a symbol.

The Veerashaiva Lingayats currently get 5 percent reservation under the 3B category of the OBC quota, they want to move to 2A so that they get 15 percent.

Ahead of next year’s Assembly polls, the reservation issue has become a headache for Karnataka Chief Minister Basavaraj Bommai as several communities among OBCs in Karnataka are also seeking an increase in their reservation quota.

Several communities, including the Panchamasalis, Vokkaligas, and Marathas, have sought an increase in their reservation quota.

The Karnataka government had on Tuesday tabled a Bill in the state Assembly to increase reservations for Scheduled Castes (from 15 per cent to 17 per cent) and Scheduled Tribes (from 3 per cent to 7 per cent) in the state, breaching the Supreme Court mandated 50 per cent cap on quotas.

The SCs make up 16 per cent of the state’s population, and the STs constitute 6.9 per cent.

Mr Bommai has said that an appropriate decision on their demands would be taken based on the Commission’s report.

On CCTV, Man Attacked With Sword Near Mumbai Allegedly Over Trade Dispute