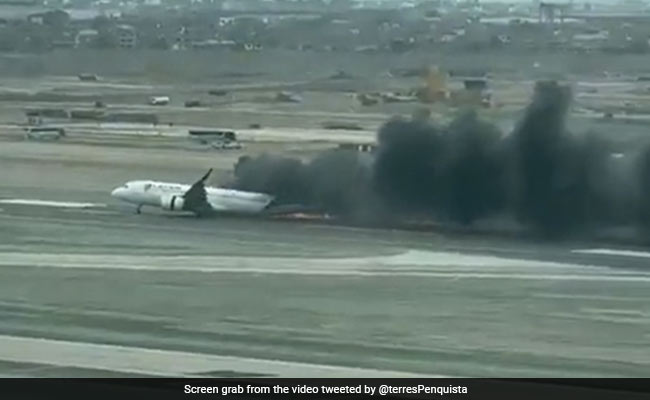 No passengers and crew members were killed.

A LATAM Airlines plane taking off from the airport in Peru’s capital Lima struck a firetruck on the runway and caught fire on Friday. In a social media post, the authorities said that plane’s passengers and crew were all safe, but two firefighters in the truck were killed in the accident.

Several videos of the collision between the aircraft and the fire truck have surfaced on social media. In one of the clips, the passenger plane can be seen colliding with the fire engine coming from the opposite side as it careened down the runway. In another video, the plane is seen catching fire and releasing thick black smoke.

#LATAM#airplanecrash update. Looks like the Lima Airport tower failed to control the traffic on the runway. Fire truck and airplane on runway. pic.twitter.com/FQOVo3mE6T

As per LATAM Peru, flight LA 2213, covering the Lima-Juliaca route, collided with a fire engine that entered the runway during take-off at Lima’s Jorge Chavez International Airport. Following the incident, the passenger plane was grounded and emergency services were rushed to the spot in order to carry out the rescue operation.

Regarding the incident in Lima, LATAM Airlines Peru regrets the passing of 2 firefighters who were in the vehicle that collided with the plane, as reported by Lima Airport Partners, the operator of Jorge Chavez Airport.

Peru’s health ministry said that 20 passengers were treated in a clinic, and at least two were in serious condition. No passengers and crew members were killed. The ministry further stated that 61 people had been moved to nearby clinics and hospitals from the Jorge Chavez International Airport. But as per Reuters, it is not clear whether this was due to injury or precaution.

Separately, Peru’s President Pedro Castillo expressed condolences to the families of the two firefighters. In a Twitter statement, Mr Castillo said that he was praying for the recovery of those injured.

“I express my heartfelt condolences to the relatives of Angel Torres and Nicolas Santa Gadea, brave firefighters who died in the accident that occurred at the Jorge Chavez Airport. My thoughts and my prayers are with them. I pray for the recovery of the wounded,” Mr Castillo wrote.

Currently, according to the airline, the incident is being investigated.

‘Was Shattered Seeing Bruises On Her Neck’: Shraddha Walkar’s Manager At Work “We Will Go Against The Grain” – Deadline