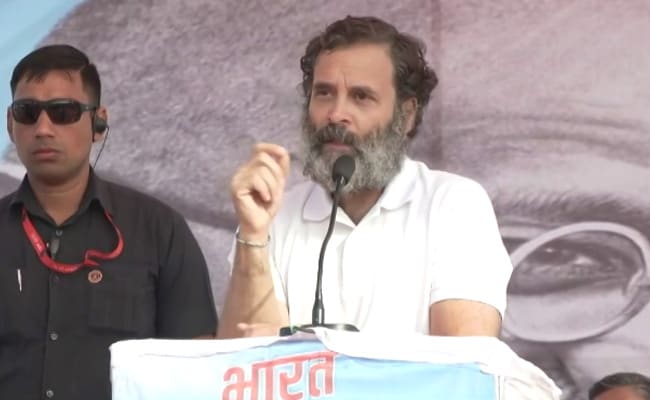 Hours after Congress communications in-charge Jairam Ramesh suggested that sudden action regarding a Covid surge in the country is a ploy to disrupt the ‘Bharat Jodo Yatra’, Congress MP Rahul Gandhi, who is leading the pan-India foot march, directly said the Health Minister’s recent letter to him to halt the march if Covid protocols are not being followed is an excuse.

“This yatra will travel till Kashmir. Now they (the BJP) have come up with a new idea. They wrote a letter to me saying Covid is coming, so stop the yatra. Look, now excuses are being made to stop the yatra. Wear masks, stop the yatra…these are all excuse. They are scared of the strength and the truth of this country,” he said while addressing the media in Haryana’s Nuh.

Union Health Minister Mansukh Mandaviya had earlier written to Rahul Gandhi to ensure Covid “protocol” is followed in his ‘Bharat Jodo Yatra’. Citing concerns after a spike in China, Mr Mandaviya, in his letter on Tuesday, had “requested” Rahul Gandhi to suspend his yatra “in the national interest” if “protocol” could not be followed.

“I request [Rahul Gandhi] that Covid protocol, including use of masks and sanitisers, be strictly followed during the march and only those who are vaccinated be allowed to participate,” Mr Mandaviya wrote in the letter.

“If this Covid protocol cannot be followed, then, in view of the public health emergency, and to save the country from the Covid pandemic, I request you to suspend the ‘Bharat Jodo Yatra’ in the national interest,” he added.

The Health Minister doubled down yesterday, after Congress workers and leaders accused him of hypocrisy. “I cannot neglect my duty of stopping potential Covid spread just because one family perhaps believes it’s above the rules… No one is entitled to special treatment,” he said.

“Several people” have caught the virus after participating in the yatra, he said, citing Himachal Pradesh Chief Minister Sukhvinder Singh Sukhu as an example.

The Congress had said, “We will certainly follow whatever protocol is put in place”.

The central government today told the parliament that random sampling for Covid tests of incoming international travellers has started at airports. PM Narendra Modi is also to hold a review meeting after 3.30 pm in light of a massive surge in China.

India, too, has the presence of a sub-variant of the Omicron variant, called BF.7, which is driving the new surge in China. Its four cases have been reported in India – the first one in July and the latest in November. Overall cases in India continue to be relatively meagre, at fewer than 200 daily for several days now. NCB Says Many Irregularities In Case