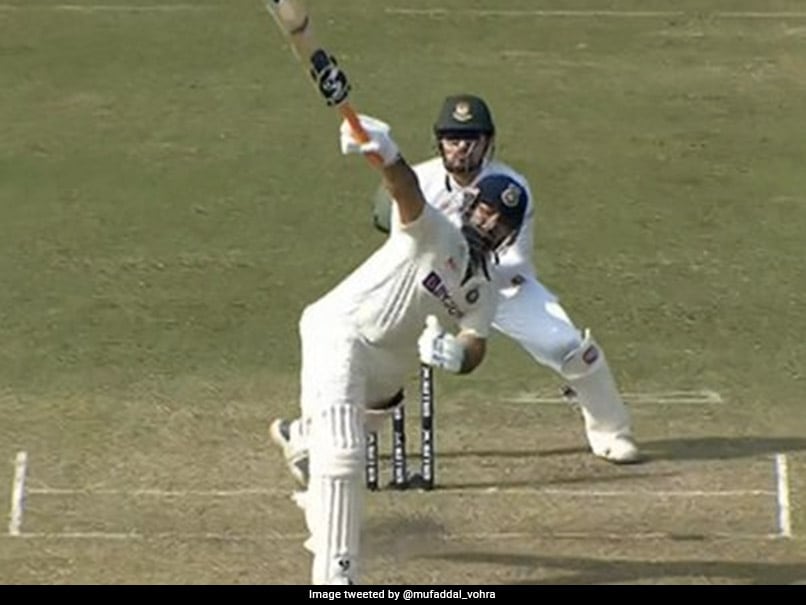 Rishabh Pant played a quickfire knock of 93, falling his 7 runs short of his 6th century.© Twitter

India kept an upper hand over Bangladesh on Day 2 of the ongoing second Test of the two-match series at Mirpur. After bundling out the hosts at 227 on Day 1, Team India smashed 314 runs with major contributions from Rishabh Pant (93) and Shreyas Iyer (87). The duo stitched a massive partnership of 159 runs before Mehidy Hasan dismissed Pant. At the beginning of Day 2, Team India faced early blows as their top three batters were sent back in quick succession by Taijul Islam. But, Pant and Iyer rose to the occasion and brought the hosts back on track.

Apart from a blistering knock of 93 runs, the wicketkeeper-batter also caught attention after he struck a one-handed six during his innings. In the 58th over, Pant smashed a massive 100m six on Mehidy Hasan’s delivery, which left everyone in disbelief as he effortlessly used his single hand to send the ball straight into the crowd.

Coming to the match, Pant, who got out in the 90s for the sixth time in his Test career, again brought his ‘A’ game to the fore with a counter-attacking knock that formed the corner of India’s first innings score of 314.

Between lunch and tea, the match which seemed to be hanging in balance was singlehandedly changed by Pant, whose 104-ball innings had seven fours and five huge sixes — a few of them being one-handed lofts.

Shreyas Iyer, who has been very consistent since his Test debut last year, also batted with a lot of intent but missed his second hundred of the series, getting out for 87 off 105 balls.

Riding on the 159-run fifth wicket stand between Pant and Iyer, India, who were left tottering at 94 for 4, will fancy their chances for a fourth-day finish and consolidate their position in the World Test Championship table.

Ananya Panday Is Holidaying In Thailand And She Is Not Alone