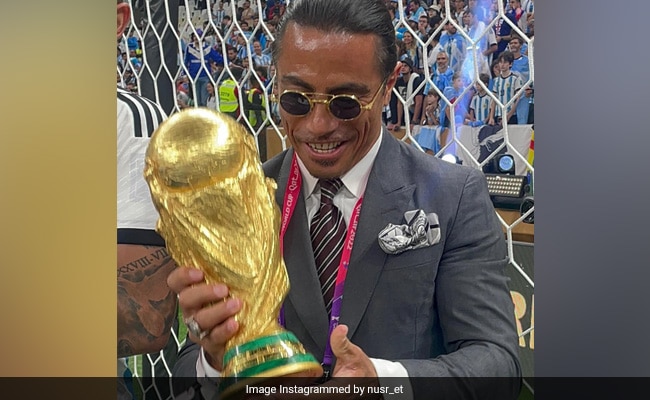 The Turkish salt sprinkler was seen touching the FIFA trophy

Turkish chef Nusr-et Gokce, better known as ‘Salt Bae’, has been banned from the US Open Cup final after his antics at FIFA World Cup celebrations angered football fans across the world. Founded in 1914, it is the oldest and most prestigious soccer tournament in America. The development has been confirmed on the official Twitter handle of the US open cup.

In a tweet, US Open cup wrote, ”Salt Bae is hereby banned from the 2023 @opencup Final.”

Salt Bae is hereby banned from the 2023 @opencup Final

The decision comes after the celebrity chef caused a commotion at the FIFA World Cup final and broke a key FIFA rule. He left the fans massively annoyed after he made it onto the pitch and crashed Argentina’s World Cup celebrations at the Lusail Stadium when the players were rejoicing with their families. In total disregard of FIFA rules, the Turkish salt sprinkler was seen grabbing the coveted FIFA trophy from other players and posing with it.

If that was not enough, the chef could also be seen pestering Lionel Messi for a picture, however, the player ignored him and continued hugging his teammates instead. Not getting the hint, Salt Bae persisted in bothering Messi and eventually succeeded in getting a photo with him. He also posed alongside other team players, including Alexis MacAllister, Paulo Dybala, Nicolas Otamendi, Angel di Maria, and Leandro Paredes, and was also seen biting some of the champions’ medals.

The 39-year-old’s presence on the pitch sparked outrage from the fans on social media, with many questioning how was he allowed to be there.

The 18-carat gold trophy, estimated to be worth around USD$20 million is famously only allowed to be touched by a select few. According to the FIFA website, “The original FIFA World Cup Trophy can only be touched and held by a very select group of people, which includes former winners of the FIFA World Cup and heads of state.”

Many on Twitter welcomed the decision to ban him. One user wrote, ” He can serve steak to the winners, but hands off the damn trophy.” Another wrote, ”As a Turkish citizen this made me very happy. Thank you.” A third said, ” He literally harassed the players! They couldn’t even enjoy their game win!”

A fourth added, ”Guy is an absolute loser. Should be banned from more. Pulling and pushing the players AND the trophy they won after years and years of hard work. So disrespectful that it’s unbelievable.” Yet another said, ”Very right decision. I support this. It is unacceptable for Nusret to use sports events for advertising purposes.”

Notably, Salt Bae shot to fame online for his unique way of putting the finishing touches of salt on steaks at his Nusr-Et restaurant chain.

World’s Highest Polling Station Is In Himachal With 52 Voters