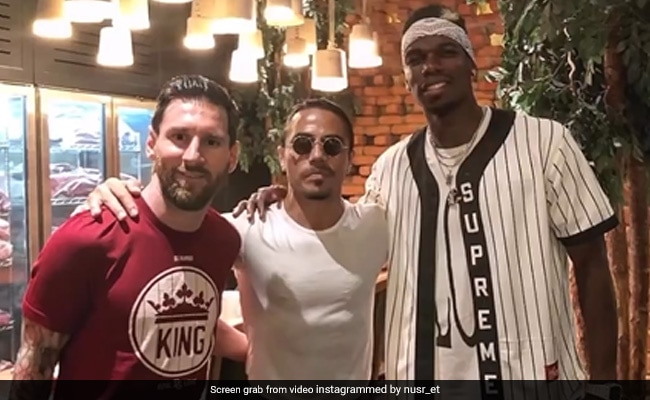 Salt Bae is seen with Lionel Messi in an old video.

As Argentina defeated France in the FIFA World Cup 2022 final match, wild partying started  after the victory. During the celebrations at the Lusail Stadium in Qatar, the football players were joined on the field by the support personnel and family members. Salt Bae, a popular Instagram chef, also found a way to get onto the field and interact with the players up close. He took a selfie with Messi as well, but cameras caught the awkward exchange as the 35-year-old footballer appeared noticeably irritated. He ignored the influencer twice but eventually the World Cup winner obliged him with a picture. Salt Bae, whose real name is Nusret Gokce, was also seen grabbing the FIFA trophy from other players and posing with it. Reacting to the development, football supporters called the scene “embarrassing” and said the chef showed “no respect” for the trophy.

However, in response to the backlash faced online for his antics, the influencer and chef has posted a clip of him meeting and posing with the Argentina captain. In the video, Messi is seen meeting Salt Bae at a restaurant. Messi then extends his arm to Salt Bae for a handshake before hugging the Turkish chef. French footballer Paul Pogba is also seen in the video. It appears that the two players had come for a meal at the restaurant. It is to be noted that the celebrity chef did not mention the time when the video was taken, however his followers were quick to point out that it was taken in 2018.

Salt Bae, captioned the video as, “the champion @leomessi #saltbae #saltlife #salt.” Since being shared, the video has amassed over 16 million views and 11 lakh likes. However, many internet users were not pleased with the celebrity chef.

“Messi doesn’t like you. Stop holding on,” said one user.

“Posting an old video to cover your insecurities,” added another person.

A third person said, “You can share as many pictures and videos with Messi as you want, that doesn’t change the fact that your behavior after the match was totally wrong. In life you should also see when it’s getting too much, and you don’t make it any better with the daily posts. Pls stop and don’t destroy yourself!”