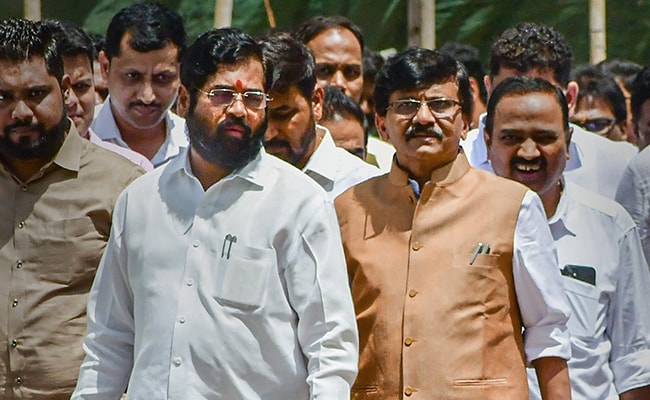 Speaking to the media, Mr Raut asked Mr Shinde if he has the “self-respect” that he had cited while rebelling against Uddhav Thackeray.

Mr Raut’s remark came after Mr Koshyari triggered a controversy on Saturday by calling the Maratha ruler an “old idol”.

Accusing the BJP of “insulting” Shivaji Maharaj openly, Mr Raut asked Mr Shinde to step down as the Chief Minister.

On Saturday, Mr Raut took a jibe at the BJP and said that his party is protesting against Rahul Gandhi’s remarks against Veer Savarkar, and they should now protest against the Raj Bhavan.

“His statement is an insult to Maharashtra and Shivaji Maharaj. BJP is carrying out protests against Rahul Gandhi’s remarks against Veer Savarkar. They are hitting out with shoes. Now the shoes should go to the Raj Bhavan from where remarks are being made against Shivaji Maharaj. Then, you are the son of Maharashtra, otherwise, you are fake,” Mr Raut said.

Addressing a function at Dr Babasaheb Ambedkar Marathwada University in Aurangabad, the Maharashtra Governor had remarked that Shivaji Maharaj has become an “old idol” and the new ones could be found in Babasaheb Ambedkar to Nitin Gadkari.

“If someone asks who your idol is, you don’t have to go out looking for one. You will find them right here in Maharashtra. Chhatrapati Shivaji Maharaj has become an old idol now, you can find new ones — from Babasaheb Ambedkar to (Union Minister) Nitin Gadkari,” he had said.

The remark on the Maratha ruler did not go down well with political leaders. A spokesperson for the Uddhav Thackeray faction condemned the remark, saying the Governor is known for disrespecting great leaders.

“Chhatrapati Shivaji Maharaj is not only our deity but also our source of inspiration. He will always be the idol for all of us,” Anand Dubey, a spokesman of the Uddhav Thackeray faction had said in a statement.