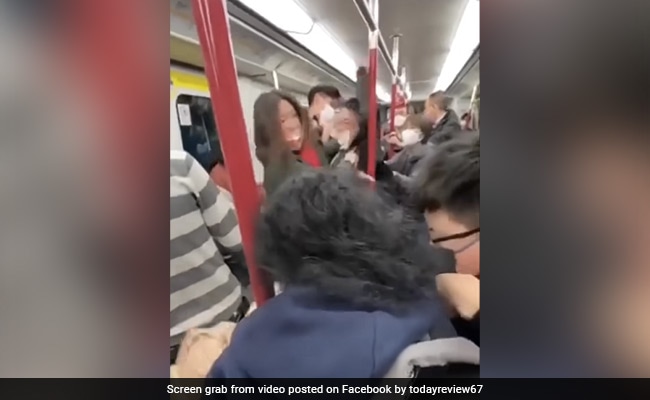 The video has sent the internet in shock

Shocking footage has emerged on social media of a man and woman fighting on a crowded MTR train as it moves through Hong Kong. Video footage of the fracas, which goes on for about 13 seconds, shows a man punching a woman dressed in black with short hair in the centre of the train carriage.

A man in a striped shirt dress tries to intervene and another man was seen trying to separate them a few times. As soon as the female passenger tries to fight back, a sudden jolt in the train upsets the balance of several passengers, and it led to the passenger tripping on the floor of the compartment.

The local media outlet, HK01 described the falling passengers as being “like bowling pins”, according to South China Morning Post.

The video was posted on a Facebook page called “Today Review67” on December 18. The undated video has over 2 lakh views on Facebook with more than 1500 likes and several comments.

According to SCMP, the fight happened on the Tung Chung line and it is not clear what caused the fight.

The video received several comments and has sent the internet in shock. A user wrote, “Hong Kong version of Street Fighter,” another user commented, “It’s too cold, they are just warming up” and the third user wrote, “Please keep a social distance”.

US General On War With China

7 Big Changes Done Or In The Works