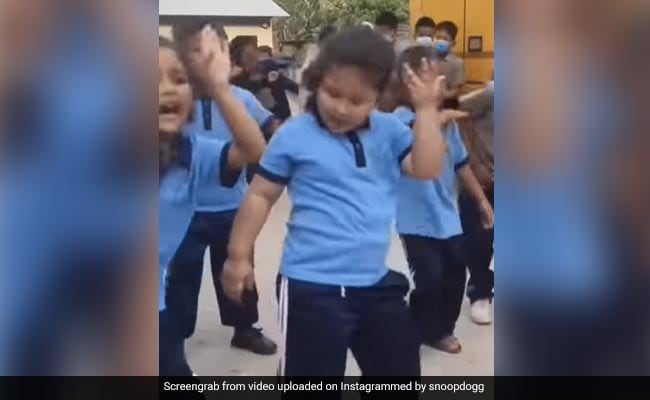 The song “Saami Saami” from the Allu Arjun and Rashmika Mandanna-starrer Indian film “Pushpa” was a viral hit on the internet. Many others have uploaded their own adaptations of the song’s dance. A video of a girl dancing to this upbeat song almost a month ago went viral. On their social media accounts and sites, a number of people shared the charming video, including Pushpa actress Rashmika Mandana.

The same video is now once again becoming popular after the unique performance caught the attention of American rapper Snoop Dogg. He also shared the adorable video of the little girl dancing to the famous track “Saami Saami,” which originally featured Rashmika Mandanna.

While the clip was shared without any caption, Rashmika responded to the video by writing in the comments section, “Love it,” along with fire and laughing emojis.

The 31-second clip opens with the little girl wearing a school uniform dancing along with her other schoolmates. Like a professional dancer, she is seen performing the song’s signature moves.

Since being shared, the video has amassed around 14 million views and more than 960,000 likes. The post also has more than 12,000 comments on it. Numerous users have left heartfelt remarks and praised the girl’s dancing skills in the comment box.

One user wrote, “This is adorable.” Another commented, “Friday mood.” Another Snoop fan simply expressed happiness that the rapper had taken notice of the adorable video in their message, “Never imagined she’d make it to your post.” After observing the unique moves, one impressed user wrote, “She’s killing it!!! Her back-up dancers need to get it together! “ What Did The Rapper Say And Has He Apologised?