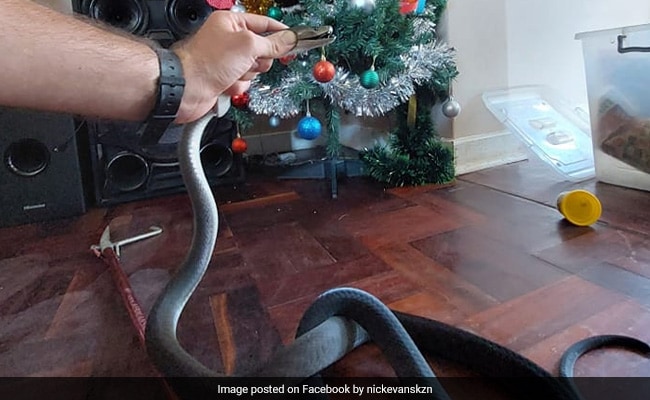 The Christmas season is in full swing, and everyone around the world has got into the festive mood. Decorating your home and putting up a Christmas tree inside is a traditional way of celebrating the festival.

Traditionally, people expect to get their gifts and toys from the Christmas tree, but a South African family was shocked when one of the most poisonous snakes in the world crawled out from underneath their tree.

“The snake was outside when it was disturbed by the gardener. It then moved away from him, out of fear, saw the open door, and dove inside. From there, it went up the Christmas tree and onto a small shelf above it. Then, while I was on my way, it slithered back down the tree and hid at the bottom, behind a speaker,” he wrote on Facebook.

He also shared the image of the captured snake. “I do wish it waited for me on the tree. That would have made for some cool photos! I picked it up from where it was hiding, with the tongs, lifted it over the wires and things that could get knocked over, put it on the lounge floor, and pinned it down. It’s about 2.1 metres long, with a portion of the tail missing. Quite a relaxed specimen, despite its ordeal,” he added.

“The family was rather shocked, as you can imagine.It’s one of the more amusing places I’ve found a mamba. I’m sure many of you reading this have thought of jokes about this scenario.”