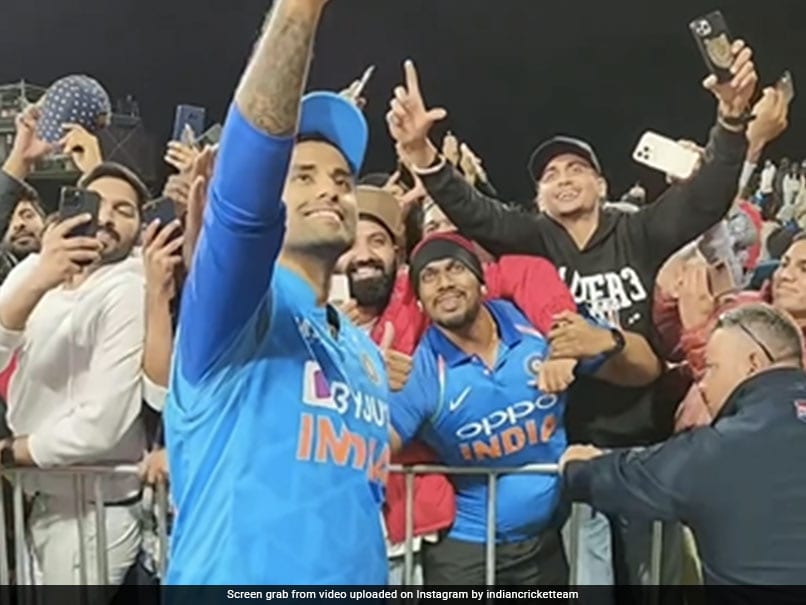 Suryakumar Yadav is currently going through the best form of his life. His stellar performances in the recently-concluded T20 World Cup couldn’t help India lift the trophy, but the player has continued his top show, hitting a dominating century against New Zealand in a T20I game on Sunday. After the first game of the three-match series was abandoned due to rain, it was a top-class batting show from Suryakumar Yadav that took the centre stage in the second T20I at the Bay Oval, Mount Maunganui.

Suryakumar Yadav hit 111 not out off 51 balls with the help of 11 fours and 7 sixes. His innings helped India post a total of 191 for 6 against New Zealand and eventually win the game by 65 runs.

While the cricket experts and avid followers of the game are tirelessly praising the player for his knock, a heartwarming video of his was uploaded on social media by the BCCI.

After the game, Suryakumar took some time to meet his fans near the stands. He took selfies and also gave autographs to the fans.

“Winning hearts on & off the field – the Suryakumar Yadav way!” wrote BCCI while sharing the video on Instagram.

Talking about the game, India defeated New Zealand to take a 1-0 lead in the three-match series. Deepak Hooda returned figures of 4 for 10, while Yuzvendra Chahal and Mohammed Siraj claimed two wickets each as the guests bundled out New Zealand for 126 runs.

The third and final T20I between the sides will be played at McLean Park, Napier on November 22.