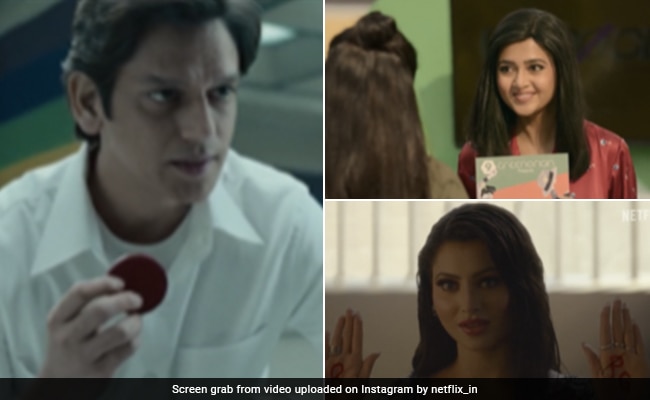 Stills from the video shared by Netflix. (courtesy: netflixindia)

Netflix’s latest post with the most unusual, unexpected crossovers is winning the Internet and how. The streaming giant fused the most popular films and TV shows with the most unusual cameos and the results were nothing short of amazing. The videos is captioned: “We thought we’d seen it all in 2022. That was until we saw these deleted scenes #NetflixPlayback2022.” The video begins with The Fabulous Lives Of Bollywood Wives stars spotting influencer Urfi Javed during their safari, dressed in animal prints. Next in line is Darlings star Vijay Varma telling Eleven from Stranger Things that he only has his eyes on National Awards.

In another segment of the video, YouTuber Ankur Warikoo and Jr NTR are seen discussing RRR‘s box office collections. Also, jabMinnal Murali gets lost in Bhool Bhulaiyaa, he is the one to help out Rooh Baba (Kartik Aaryan). This one is just too good to miss – Neha Kakkar practicing crying for the next season of a singing reality show and explaining it to Darlings stars Alia Bhatt and Shefali Shah. LOL! Devi from Never Have I Ever and Rishi from Mismatched – not a mismatched collab at all.

Another highlight – when Tejasswi Prakash’s character Kiara from Naagin 6 meets Dimple Ahuja (Prajakta Koli) from Mismatched. Not to mention Kiara’s reference to her iconic meme (with the accent of course). The best one of the lot has to be when Urvashi Rautela has the initials “RPG” painted on her hands. Those initials were for Ryan Gosling BTW. Urvashi tells Ryan Gosling that they are “made for each other.”

Check out the video here:

Which crossover did you like the best? Let us know using the comments section below.