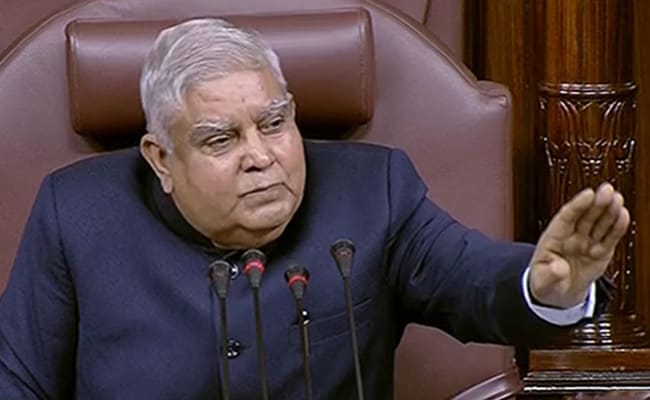 “Delegitimising judiciary means the death knell of democracy,” he said.

With Opposition Congress seeking removal of the chair’s comments on UPA chairperson Sonia Gandhi’s “delegitimise judiciary” remark, Rajya Sabha Chairman Jagdeep Dhankhar on Friday said he would have abjudicated his oath and failed in his constitutional obligation had he not reacted.

Senior Congress leader Pramod Tiwai raised the issue in the House, and his senior colleague and Leader of Opposition Mallikarjun Kharge sought, “If a Lok Sabha Member (Sonia Gandhi) talks outside, it should not be discussed in Rajya Sabha. If the chair comments, it is unfortunate. This has never happened…Whatever is said here should be removed and withdrawn. Kindly expunge it.” If it is not expunged, it will set a bad precedent, he added.

Union Minister and Leader of the House Piyush Goyal said Mr Kharge should reflect that aspersions were cast on the House and high constitutional authority, a person elected by both houses of Parliament, and who is the Vice President of India.

Some other members too made remarks on the issue.

Mr Dhankar said, “…The observations were with respect to what I said from this chair on December 8. The observations were to that extreme degree as chairman Rajya Sabha and Vice President can be enlisted by the ruling party to delegitimise judiciary.” He said had he not reacted, it would have “demeaning consequences” and an impression sought to be imparted that the chair would become a party to a pernicious and sinister design at the instance of the government to deligitimise the judiciary.

“Delegitimising judiciary means the death knell of democracy. This partisan battle has to be settled inter se,” Mr Dhankar said.

The Rajya Sabha Chairman further said, “I can assure the members that I engaged in massive homework with everyone who knows the subject, interacted with past secretary generals, and then concluded that I will be abjudicating my oath and I will be getting away from my constitutional obligation if I do not react.” On December 22, Mr Dhankhar had termed “inappropriate” the remarks made by UPA chairperson Mrs Gandhi that the government is seeking to “deligitimise the judiciary” and urged political leaders not to subject high constitutional offices to partisan stances.

He had also said Mrs Gandhi’s statement was far distanced from his reflections, as delegitimising the judiciary is beyond his contemplation.

Sonia Gandhi, who is also the chairperson of the Congress Parliamentary Party, had on December 21 accused the Centre of making a calculated attempt to “delegitimise” the judiciary, describing it as a “troubling new development”.

She had also accused the government of making an effort to reduce the standing of the judiciary in the eyes of the public.

“A troubling new development is the calculated attempt underway to delegitimise the judiciary. Ministers and even a high constitutional authority have been enlisted to make speeches attacking the judiciary on various grounds,” she had said.