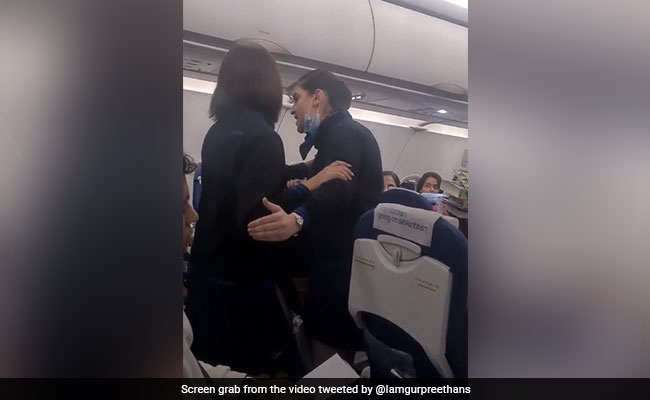 The video of the argument was shared on Twitter by one of the passengers.

A video of an argument between a passenger and one of the crew members of IndiGo airline has gone viral on social media. According to the person who shot the clip and posted it on Twitter, the incident took place on the airline’s Istanbul-Delhi flight over limited food choice. The airline has not yet commented on the incident, but the video has divided the internet. While some users called IndiGo crew hard working, others said they have observed a growing trend of crew members being impatient.

In his December 19 tweet, user Er. Gurpreet Singh Hans said he “unfortunately” booked a ticket on the IndiGo flight.

“Every international long distance (we can manage from Dubai to India) flight has a food choices video in front of seats but can’t. Some people can manage but some can’t, they need a choice of food,” Mr Hans said in his first tweet.

Even staff checked our boarding pass before giving us food which is not right for long distances #internetflight@IndiGo6E@AAI_Official@DelhiAirport@GovtOfIndia_ one thing you must need to realise is that “we choose you, you can’t” pic.twitter.com/2uLIqhG5vw

The accompanying video shows a heated argument between the airhostess and a passenger (who is not visible). The crew member accuses the passenger of talking to the staff harshly, which made one of them cry.

The airhostess tells the man, “You are pointing finger at me and yelling at me. My crew is crying because of you. Please try to understand, there is a cart and counted meals are uplifted (on the plane). We can only serve what your boarding…”

But before she could complete, the passenger shoots back, “Why are you yelling?” “Because you are yelling on us,” the airhostess replies, raising her voice.

Her colleague intervenes and tries to calm them down but the passenger and the airhostess keep firing shots at each other.

“I am sorry but you cannot talk to the crew like that. I am peacefully listening to you with all due respect but you have to respect the crew as well,” she is seen telling the passenger.

The man asks, “Where have I disrespected the crew?” to which the airhostess again highlights the finger pointing. “Shut up,” the man says. “You shut up,” replies the airhostess adding that she is an employee of the company and he cannot talk to her like that.

The man then says she is a servant, to which she again clarifies she is an employee. “I am not your servant.”

The fight then abruptly ends and the airhostess’ colleague escorts her to the back of the plane.

Mr Hans said the staff checked the boarding passes of the passengers “which is not right for long distance flights”. He added, “One thing you must need to realise is that “we choose you, you can’t.”

“I’ve observed a growing trend of  @IndiGo6E crew being impatient on my three recent journeys, even while answering basic queries or handling irritation after waiting in T3 Delhi madness. Customers need to be polite, but service providers also need to be sensitive & patient!” commented one user.

“These air hostesses work so hard always smiling and help with open hearted. If she is yelling on the passenger that’s means something bigger must have happened,” said another.

Suhana Khan Checked Into The Archies Wrap Party Like This

Varun Dhawan’s Film Is Helped Along By Lively Performances -3.5 Stars