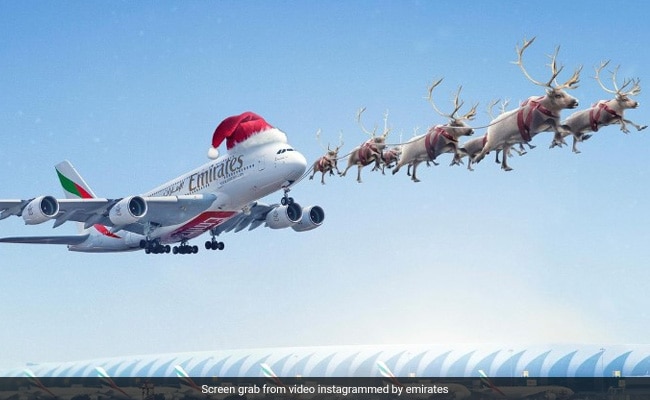 The airline is getting into the holiday spirit.

The Christmas season is in full swing, and everyone is in a festive mood. The concept of Santa Claus and reindeer is deeply associated with it. The reindeer represent many positive things, including safe travel and endurance during the holiday season. Emirates Airlines, the national airline of the United Arab Emirates, is also getting into the holiday mood by converting one of its passenger aircraft into Santa’s sleigh.

The airline shared a short video clip on Instagram of a plane wearing a Santa hat being lifted off the ground and taken to the skies by reindeer in the most Christmas-like way.

Emirates shared the video on Instagram with a caption that reads, “Captain Claus,” requesting permission to take off. “Merry Christmas from Emirates.” #Emirates #FlyBetter.”

Over 450,000 people have liked it, and it’s been viewed about 8 million times. People have appreciated the video a lot, and they have showered it with a lot of lovely remarks in the comment section.

“This makes me want to get on an Emirates holiday,” wrote one user.

Watching the video from another perspective, one user commented, “I think it’s really cruel to have reindeer pull something so heavy. I can’t imagine this will go down well with animal welfare.”

“I love it that Santa has class A taste!” wrote a third user.

Why ‘Bikini Killer’ Charles Sobhraj Is Being Freed After 19 Years