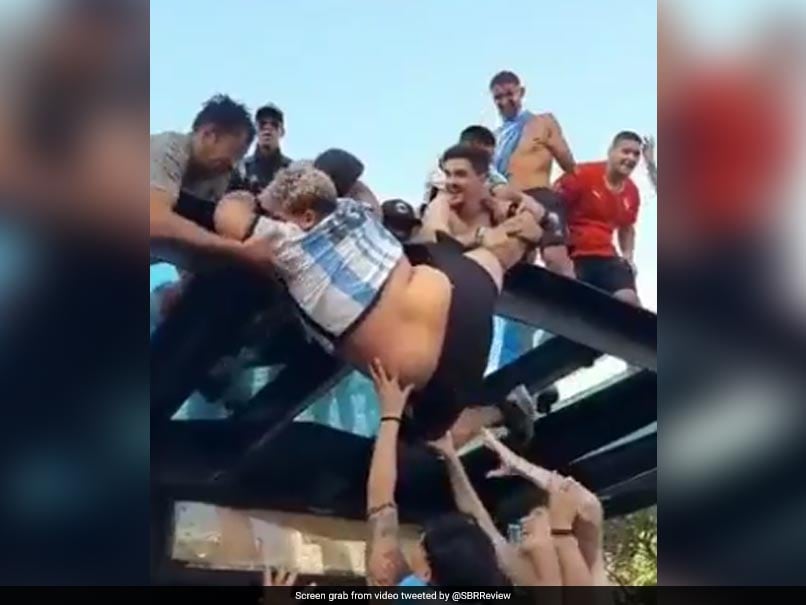 FIFA World Cup: Glimpse of the wild celebration of the Argentina fans© Twitter

Argentina and its football fans have been swept by a wave of celebration after the Lionel Messi-led team’s astounding win over France in arguably the greatest FIFA World Cup final on Sunday. Argentina’s World Cup winners returned home from Qatar in the early hours of Tuesday morning ahead of a welcome home party in the nation’s capital. The fans in Argentina capital Buenos Aires and other places have, however, not stopped celebrating since the win.

In a recent video, that has been doing the rounds on social media, celebrating fans can be seen lifting a heavy man, wearing an Argentina jersey, atop a bus stop.

Argentina fans went WILD when this big man finally made it atop a bus shelter in Buenos Aires. pic.twitter.com/n4lwj1PLyE

Messi finally crowned his record-breaking career with football’s biggest prize as he produced one of the greatest World Cup final performances, scoring a first-half penalty and netting again in extra time for Argentina against France.

The final was billed as a titanic showdown between Messi and French superstar Kylian Mbappe, and it did not disappoint football fans around the world. Messi had cemented his place long ago among the greatest of all time, but the football world was abuzz ahead of the final with the prospect of the fleet-footed magician crowning his glittering career with the World Cup — the one major trophy he had never won.

In the final match, France had fought back from 2-0 down in the last 10 minutes of the match as Kylian Mbappe scored twice to equalise and force extra time in a pulsating match watched by an 89,000 crowd in Lusail Stadium.

Messi seemed to have decided the match in extra time with his second goal of the game before his Paris Saint-Germain teammate Mbappe completed only the second World Cup final hat-trick in history to bring the score to 3-3 and force penalties. Gonzalo Montiel swept home the decisive spot kick to win the shootout 4-2 for Argentina — but this was Messi’s moment.

Australia vs West Indies 2nd Test: When And Where To Watch Live Telecast, Live Streaming