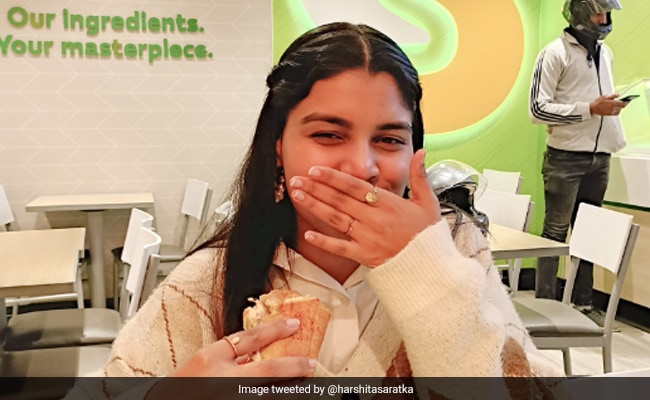 A woman got more than she bargained for when she went online to ask the web to help photoshop a bystander out of her picture. A Twitter user named Harshita posted a candid picture of her eating a sub sandwich at a Subway outlet. In the picture, she was seen smiling while covering her mouth.

However, she was not happy with the outcome as a random man was seen in the background, bombing her photo. The stranger wearing a helmet was seen standing near the billing counter, spoiling her otherwise solo picture. So, she turned to the internet and requested people to remove him from the pic. “Can someone please remove that guy in the background and let me enjoy my sub?” Harshita wrote in the caption of her post. Since being shared on December 20, the post has received more than 304 retweets, 242 quote tweets and 4,664 likes, and hundreds of replies.

can someone pls remove that guy in the background and let me enjoy my sub??? 😭 pic.twitter.com/KGJ6EsxNAg

Needless to say, many people came to her rescue and used their creative editing tools to adhere to her request. But, with a funny twist! While they removed the man from the picture as requested, they started editing the picture with funny objects and other people. The post soon started a meme fest, and the results are just hilarious.

From inserting pictures of people who were featured in viral memes to photoshopping her in exotic places, people didn’t disappoint. Some people even photoshopped themselves in the picture.

Enjoying a Subway in a subway 🚇 pic.twitter.com/7r7DQxLlpW

Finally, one user did exactly what she wanted.