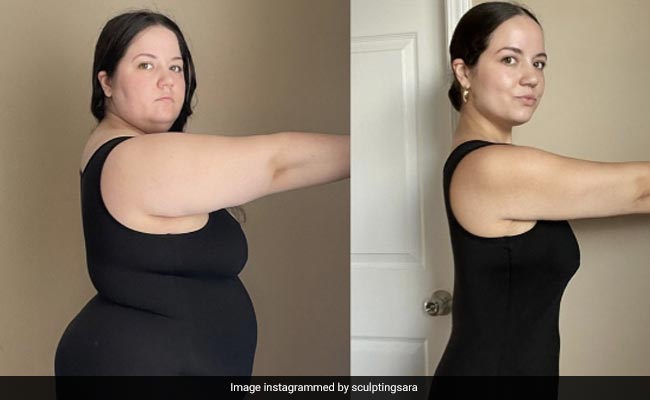 A 25-year-old woman from Washington, DC lost 62 kg after she got stuck on a slide in front of her son. Sara Lockett used to weigh 114 kg then, her husband had to pull her off the slide.

Recalling the incident Ms Lockett told Caters News, “One time my son was too scared to go down the slide on his own and wanted us to go on together. So, I tried to go on with him, and when the slide took a turn, I got stuck and couldn’t go down any further. My husband had to come over and pull me out. That moment is burned into my memory. I knew I had to try something else to get my life back.”

The mother of two underwent gastric sleeve surgery. In the interview, she admitted that she put on weight during her pregnancy. She was diagnosed with high blood pressure and gestational diabetes. Ms Lockett said, “I also didn’t have the best diet and suffered from binging. I’d eat what I could during the day, and then have two dinners in the evening and lots of snacks.”

She revealed that she used to consume 3,000 calories per day. She used to gulp down Pop-tarts for breakfast before indulging in a burger, chicken nuggets and a large sugary soda for lunch, New York Post reported.

After the slide incident, Ms Lockett decided to lose weight naturally by changing her diet and working out. During the process, she was also diagnosed with polycystic ovary syndrome, or PCOS, which made the weight loss journey harder. The doctors suggested she try the gastric sleeve to lose weight and balance her hormones.

“I had my surgery in September 2021 and, luckily, my insurance paid for 98% of it,” the mom of two stated. “I had mixed feelings about the surgery. I was so excited, but I knew it would also be a mental journey where I had to work on balancing my lifestyle and my relationship with food.”

She shared, “After the surgery, I went through the recovery stages. I had to start with a liquid diet before moving on to a soft food diet while I adjusted to my new stomach.” She added, “The weight started coming off, and it was really encouraging, but I started seeing massive changes when I began working out six weeks after my surgery.”

Thanks to her healthy lifestyle, Ms Lockett now weighs 53 kg. She starts her day with egg whites with tomatoes and spinach for breakfast. For lunch, she indulges in a small portion of rice, steamed vegetables and minced turkey, and chicken or shrimp wrapped in lettuce leaves for dinner. She works out regularly, New York Post reported.

“For My Friends In Bangladesh…”: Harsha Bhogle To Fans Over ‘Fake Fielding’ Controversy Involving Virat Kohli